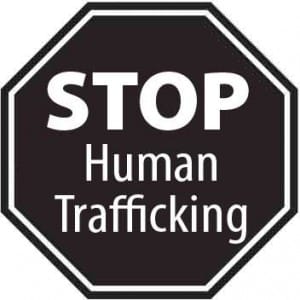 The RSF Foundation Community Room lived up to its name this week when a group of community members met together in our space to address a troubling issue in the San Diego County community:  human trafficking.

San Diego Social Venture Partners (SDSVP) has identified human trafficking and child and domestic violence as their current focus areas. SDSVP used the community space at RSF Foundation for a meeting in their selection process that will lead to grants and consulting services for some nonprofits serving these areas of need in San Diego County.

Is Human Trafficking Really a Problem in San Diego County?

A study co-authored by two professors at USD and PLNU found that there are from about 8,000 – 11,000 victim/survivors of sex trafficking per year in San Diego County. They also learned that sex trafficking represents about $800 million in annual revenue. And, what’s more, sex trafficking is just one kind of human trafficking. Human trafficking is defined as modern day slavery — using force, coercion, deception, or other forms of the abuse of power for the purpose of exploiting another person.

The USD and PLNU study of sex trafficking in San Diego County found that 15 years old is the average age of entry into child commercial sexual exploitation (CSEC). Another troubling finding is that a significant amount of CSEC recruitment happens on middle school and high school campuses. Twenty schools, located throughout the entire San Diego County region, were represented in the study, and 90% of those twenty schools had confirmed CSEC cases.

Near the Border, but not in North County San Diego, right?

Wrong. According to the USD and PLNU study, 80% of sex-trafficking victim/survivors are domestically trafficked. Race, nationality and socio-economic conditions are less important than isolation and vulnerability. Child commercial sexual exploitation (CSEC) recruiters, often gang-related, prey on young people often by deceiving them and enticing them into a relationship. If these young people have been abused, homeless, or in the foster care system, they often don’t know what a healthy relationship looks like. These young people can easily be deceived by someone simply showing an interest in them by buying them gifts or taking them out for a meal.

What Can the Community Do About Human Trafficking?

This is an issue that makes us uncomfortable. Facing the magnitude of this problem in our local communities, we realize that we are to some extent implicated in it. How is this happening in our schools, our parks, our shopping areas, and we aren’t aware of it? It is up to us to become informed, vigilant and prepared to protect the most vulnerable individuals among us.

By taking on this problem as a focus area, San Diego Social Venture Partners is committed to strengthening and expanding nonprofit programs in San Diego County that are addressing human trafficking. We applaud them for their effort and look forward to learning from their work in this area. We will also be joining San Diego Grantmakers for an upcoming convening of local funders to discuss collaborative approaches to address human trafficking.

Currently, in the San Diego region, the need is great and the resources and programs are relatively small. As a community foundation, the RSF Foundation is committed to raising awareness of both the needs around human trafficking in our community and the programs that are in place to address these needs.

The RSF Foundation is a resource to inform our compassionate and generous donors and community members of opportunities to support these programs and services with their charitable giving. Please contact us for more information and resources on this important topic.

One thought on “What Can Our Community Do About Human Trafficking in San Diego County?”